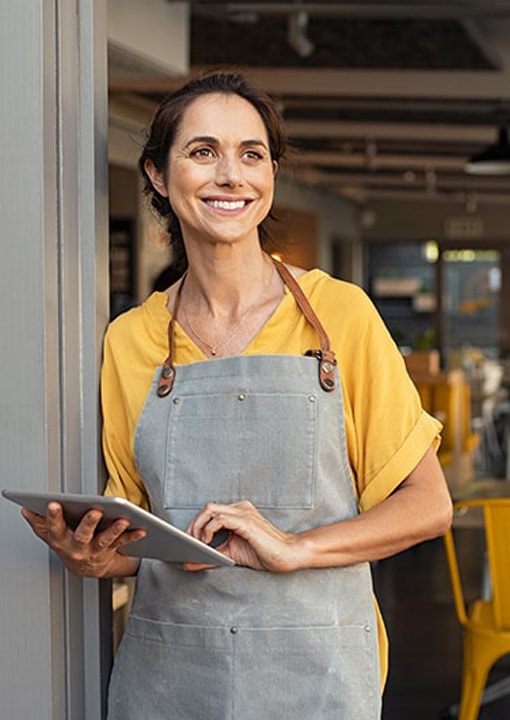 From a compact, 200-square-foot kiosk located on the University of California’s flagship Berkeley campus, Bbox serves a collection of hearty goods, including pastries and java from local purveyors Semifreddi’s and Highwire Coffee Roasters, respectively.

Save the customers filtering in and out of the young concept, there’s not a human in sight.

No barista handing out steaming cups of joe.

Rather, consumers order ahead via a mobile app before picking up their goods—prepped and loaded into a cubby by a robot—at the Bbox kiosk.

This, of course, is the wild plan Greg Becker and Scott Lessans cooked up years ago. As cofounders of Nourish Technology, Bbox’s tech-savvy parent company, Becker and Lessans saw technology as a means to alter the way food is ordered, cooked, and consumed. It was an opportunity to revolutionize the status quo with a restaurant concept that the creators of “The Jetsons” might have concocted.

“We’re servicing the occasion, allowing people to get something quick that they can enjoy as they’re on the move,” Becker says.

Bbox is undeniably futuristic, unapologetically bold, and, just possibly, a harbinger of things to come in the pressure-packed quick-service world, one in which high-tech tools like robotics and artificial intelligence (AI) have arrived to offer a competitive boost.

As robotics and AI enter the quick-service world, no cuisine or format is off-limits.

In San Francisco’s Bay Area, Zume Pizza uses robotics and AI to craft its pies, from pressing the dough and spreading the sauce to placing pizzas in the oven. Down the California coast in Pasadena, CaliBurger tested AI-powered facial recognition software that allowed customers to pay for their meals with a glance into the camera.

But it’s not just the starry-eyed upstarts bringing the high-tech flavor. Last fall, Pizza Hut unveiled the PIE Pro, a delivery-focused innovation in which a pre-assembled pizza is cooked and sliced within the bed of a Toyota Tundra pickup truck before being dispensed to the customer.

Companies like Clinc and Encounter AI, meanwhile, are helping established quick-service players integrate AI into their drive thrus to fuel a faster, more accurate experience. From prompting the customer to order and processing the request to sending the order to the restaurant’s point-of-sale system, Encounter AI’s technology processes a drive-thru order from end to end. Staff members only collect payment and supply the food.

As a kid in Southern California, Alex Vardakostas grew up working in his parents’ two burger joints, A’s Burgers.

“When your job is to make 400 of the same burger every single day, fast, you realize there is an opportunity to make burgers better,” Vardakostas jokes.

There’s minimizing that monotony, of course, but so much more, from improving food quality and product consistency to better utilization of labor. Vardakostas imagined an alternative that would attack the pain points of restaurant operations. Then he built it.

Blending the haute cuisine techniques of alums from Michelin-starred restaurants with the engineering talents of roboticists from Disney Imagineering, NASA, and Tesla, Vardakostas launched Creator last summer in San Francisco’s Financial District. The 2,200-square-foot eatery bills itself as the first start-to-finish, fully automated preparation process for a major food segment. Creator’s robot kitchen assembles its gourmet burgers gently, much different than the rough work of human hands. The robot kitchen also dispenses sauces down to the milliliter, slices buns after an order is placed, and cuts tomatoes, pickles, and onions to order.

An immediate hit, Creator has captured headlines and fans alike for its burgers and tech-powered novelty. Upon watching a robot craft his burger, one reviewer said he was “mesmerized.”

Visionary entrepreneurship and real-world pressures hampering the restaurant landscape are just a few of the factors driving the high-tech world’s rush into the quick-service space.